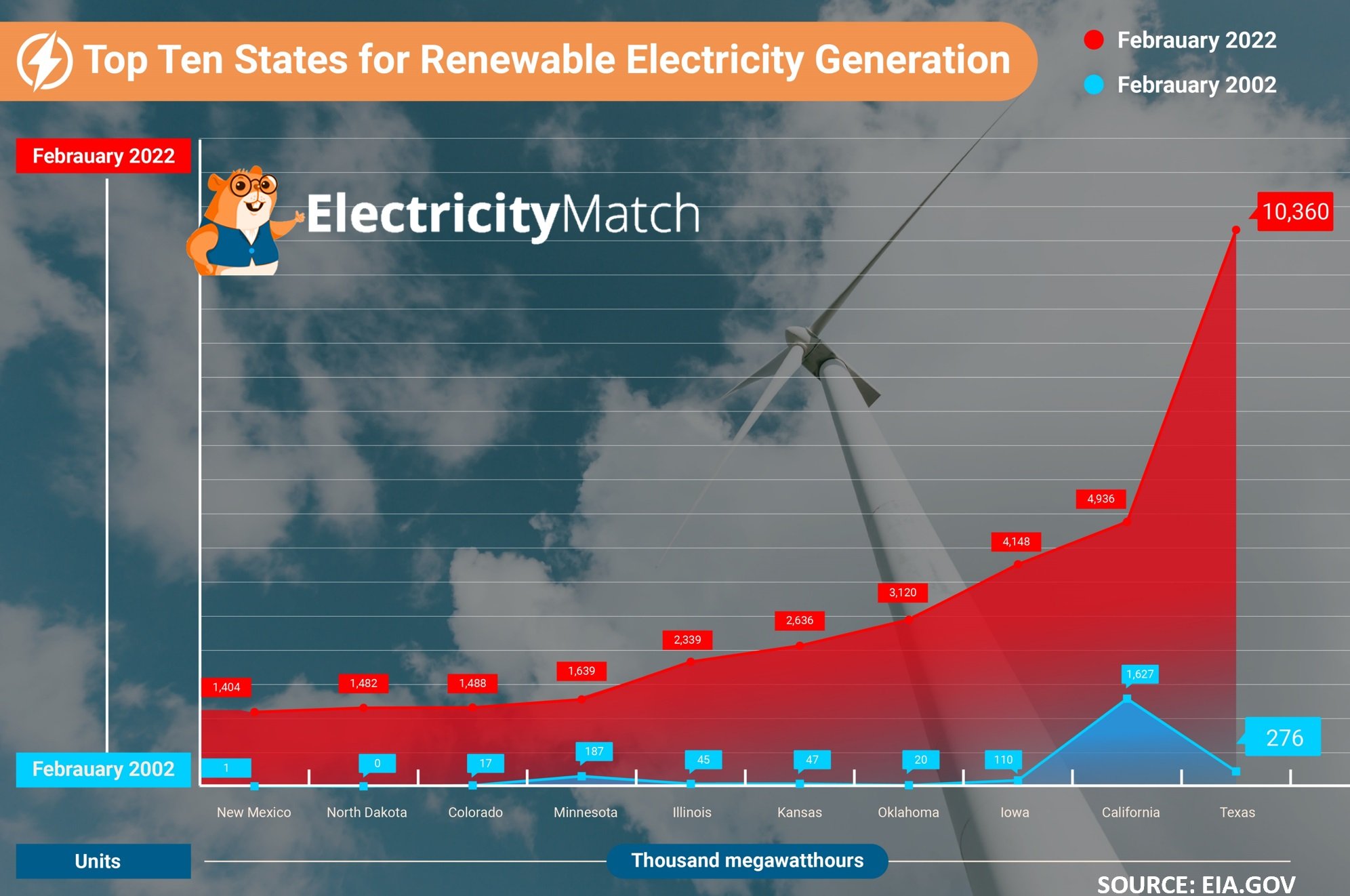 For the first time in its history, the United States has generated more electricity from renewable sources than coal, according to new data from the U.S. Energy Information Administration (EIA). Texas leads the nation in renewable energy production, and the rest of the country isn’t far behind. It’s still early days for America’s green energy transition, but this is one milestone we can all get excited about as our world gradually moves away from fossil fuels and toward cleaner sources of power like wind and solar.

The EIA’s new report shows that in 2022 renewable energy sources generated 22% of all electricity in the United States. That’s a record high, and it marks the first time renewables have surpassed coal, natural gas, and nuclear power as America’s leading source of electricity generation. The majority of this renewable energy came from hydropower (6.5%), followed by wind power (20%) and solar power (2.8%).

Texas is leading the way in renewable energy production, generating more than twice as much wind power as any other state. In fact, Texas produces so much wind power that it sometimes has to give it away for free because there isn’t enough demand for it.

How Texas Produces More Green/Renewable Energy Than Any Other State In The U.S?

The Texas Legislature has created several policies to increase the state’s renewable energy development in the last decade. These include a Renewable Portfolio Standard (RPS) that requires electric utilities to generate a certain amount of their electricity from renewable sources and incentives for businesses to invest in renewable energy.

The RPS has been particularly successful in driving wind power development in Texas. In 2002, the state had just over 300 megawatts (MW) of installed wind capacity. By 2016, that figure had grown to more than 18,000 MW – enough to power more than 5 million homes.

Texas’s success in attracting wind power developers is partly due to its large land area and abundant wind resources. The state also has a well-developed infrastructure for transmitting electricity from remote rural areas to population centers.

In addition to its RPS, the Texas Legislature has created several financial incentives to encourage businesses to invest in renewable energy. These include a tax exemption for renewable energy equipment, grants, and loans from the Texas Renewable Energy Industries Association (TREIA).

These policies have helped make Texas a leader in renewable energy development, and they’re also helping to create jobs and boost the state’s economy. According to TREIA, the renewable energy industry now employs more than 100,000 people in Texas.

And it’s not just the wind industry that’s booming in Texas, solar is also on the rise. In 2016, Texas ranked 5th in the nation for installed solar capacity, with more than 2,200 MW of capacity. That’s enough to power more than 430,000 homes.

The growth of solar in Texas is being driven by a number of factors, including the state’s RPS, which requires utilities to generate a certain amount of their electricity from renewable sources. Solar is also becoming more cost-competitive with other forms of energy, thanks to declining costs and technological advances.

As Texas continues to lead the way in renewable energy development, it’s important to remember that this is just the beginning. The state has set ambitious goals for the future, and with continued support from the Legislature, businesses, and consumers, Texas will continue to be a national leader in the transition to a clean energy economy.

How does Texas Green Energy Works?

In Texas, the electric grid is managed by the Electric Reliability Council of Texas (ERCOT). ERCOT is responsible for ensuring that electricity is generated and delivered to consumers reliably and efficiently.

As more renewable energy is added to the grid, ERCOT has implemented a number of policies and procedures to ensure that the system can operate reliably. These include rules for how generators must respond to changes in demand, as well as requirements for reserve margins and the amount of extra generating capacity that must be available at all times.

ERCOT also operates a real-time market for electricity, which helps ensure that generation resources are dispatched efficiently and cost-effectively. In the market, generators offer their electricity into a central “pool”, and ERCOT dispatches the resources based on price and availability.

New Mexico is poised to lead the nation in renewable electricity generation with a Renewable Portfolio Standard (RPS) of 20 percent by 2020. The state has abundant solar and wind resources and is also home to the world’s first utility-scale storage facility.

North Dakota is another state with a well-developed wind resource. The state’s RPS requires utilities to generate 26 percent of their electricity from renewable sources by 2025. In addition, North Dakota has a number of financial incentives for businesses to invest in renewable energy.

Colorado’s RPS requires utilities to generate 30 percent of their electricity from renewable sources by 2020, and the state is on track to meet that goal. Colorado also has a number of incentives for businesses to invest in renewable energy, including tax credits and loans.

With wind power accounting for nearly half of all electricity generated in Minnesota, it’s no surprise that wind is a major player in meeting state renewable energy goals. In addition to its RPS, utilities must generate 25 percent of their electricity from renewable sources by 2025.

The state’s Renewable Portfolio Standard requires 25% of electricity sold in Illinois to come from renewable sources by 2025. Wind energy is a major contributor to meeting these goals.

Kansas is in a very good position to become a major player in renewable energy. According to EIA data, all of its fossil fuel-based electricity generations will be replaced by renewable sources by 2022. This means renewable energy sources will account for 100% of Kansas’s electricity generation. This is great news for companies involved in wind and solar power technology because it means that they will have a ready market to sell their products into.

Iowa is already ahead of schedule in transitioning to renewable energy sources. By 2022, renewables will account for 83% of electricity generation in Iowa. This is due in large part to the state’s RPS, which requires that utilities generate 85 percent of their electricity from renewable sources by 2035.

Texas continues to lead all states in renewable electricity generation, with over 10,360 Thousand MWH generated by wind power and nearly 700 thousand MWH generated by solar photovoltaic (PV) in 2022. Because Texas is one of few states that produce energy from a variety of renewable sources, including biomass, geothermal, hydropower, solar PV, and wind, it is ranking number one in green energy consumption.

As you can see, Texas is leading the way regarding renewable energy. The state has a number of programs and policies in place to promote renewable energy development. As a result, renewables are expected to account for half of all electricity generation in Texas by 2025. This is good news for the environment and for the economy. Texas is proving that it is possible to transition to a clean energy future.

How the world’s top coal, LNG exporter ran into a power crisis

The Affect of Deregulation on Texas Energy Rates

How to Choose an Energy Provider When Switching

Exelon to Split Generation Business from its Regulated…

PowerHouse Energy: ‘Part of solution to two of the…