Gantz: Israel did not cause the oil spill that polluted its beaches

“I can tell you emphatically that Israel is not responsible for the oil spill that caused the considerable damage along the coast,” Gantz told Amos Yadlin, the former head of IDF Military Intelligence and the current head of Tel Aviv University’s Institute for National Security Studies (INSS), in a conversation screened over Zoom.

The speculation that Israel might have unwittingly caused the spill followed a Wall Street Journal report on Thursday which claimed Israel has hit at least 12 ships carrying sanction-busting Iranian oil and/or arms to Syria in the Red Sea and other areas.


That report prompted social media speculation over whether Israel may itself have damaged the tanker that later spilled a reported 1,000 tons of oil that washed up on Israeli beaches.

Yadlin echoed Gantz’s response. “I can confirm this on the basis of the research that we have done at the Institute: Israel had nothing to do with the incident,” Yadlin said.

A Haaretz report Saturday night also cited information from Israel’s security establishment dismissing the notion. “There was no attempt to target an Iranian vessel that went awry,” Haaretz reported, “and therefore Israel is not responsible, not even inadvertently, for the pollution of its beaches.” 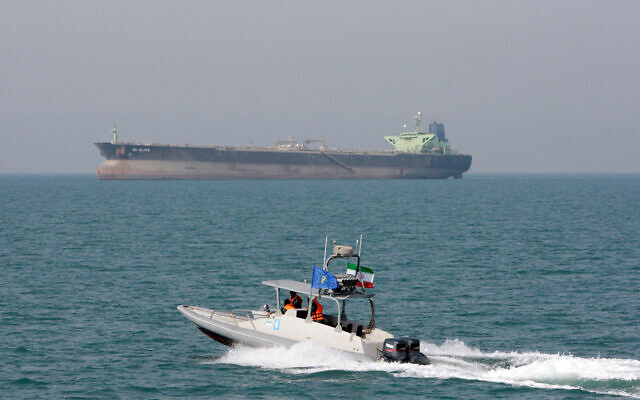 “Israel’s security establishment has no knowledge of a deliberate Iranian attempt to pollute Israel’s beaches by spilling oil,” the report said.

It said the spill was likely from a tanker carrying Iranian oil in breach of sanctions. Gamliel named the vessel as the Libyan-owned Emerald. Her ministry said it was smuggling crude oil from Iran to Syria under a Panamanian flag.

On Friday, an Iranian investigator said Israel was the likely suspect behind an attack Wednesday in the Mediterranean that damaged an Iranian cargo ship. The ship was slightly damaged by an explosive object but no one on board was hurt, Ali Ghiasi, a spokesman for state-run shipping company IRISL told semi-official Nournews on Friday.

Thursday’s Wall Street Journal report said that Israel has targeted at least 12 ships bound for Syria, most of them transporting Iranian oil, with mines and other weapons. The attacks did not sink the tankers, but forced at least two of the vessels to return to port in Iran, the report said. Israel refused to comment. 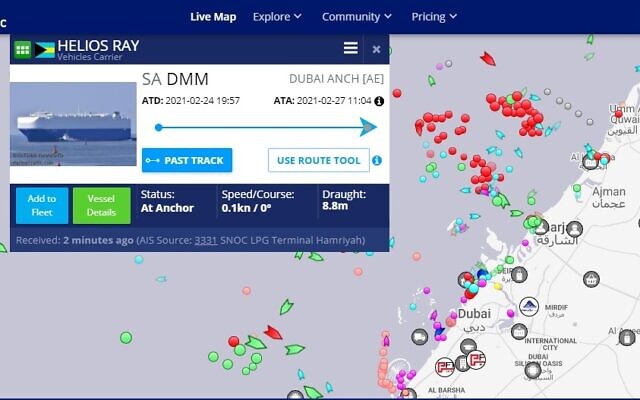 The Helios Ray, which was sailing from Saudi Arabia to Singapore, arrives at Dubai port after being hit in the Gulf of Oman, February 27, 2021 (MarineTraffic.com screenshot)

Israel has said Iran was behind a blast on an Israeli-owned ship in the Gulf of Oman last month; Iran denies the charge.

I’m proud to work at The Times of Israel

I’ll tell you the truth: Life here in Israel isn’t always easy. But it’s full of beauty and meaning.

I’m proud to work at The Times of Israel alongside colleagues who pour their hearts into their work day in, day out, to capture the complexity of this extraordinary place.

I believe our reporting sets an important tone of honesty and decency that’s essential to understand what’s really happening in Israel. It takes a lot of time, commitment and hard work from our team to get this right.

Your support, through membership in The Times of Israel Community, enables us to continue our work. Would you join our Community today?


Join the Times of Israel Community

Read More: Gantz: Israel did not cause the oil spill that polluted its beaches

Russia Refuses To Give Up On Senegal’s Oil Boom

JP Morgan warns hydrogen investors to be wary of…