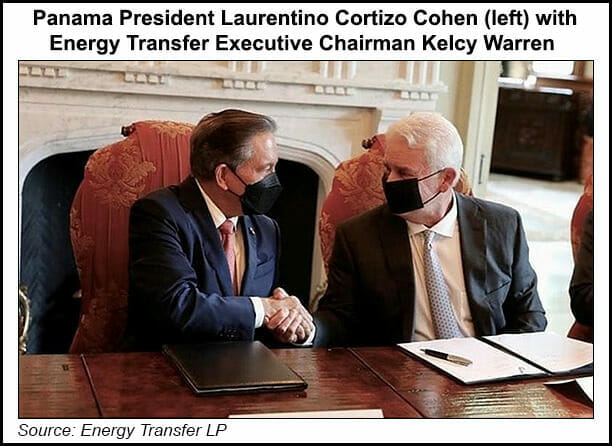 The Dallas-based company has signed a memorandum of understanding (MOU) with the Republic of Panama to jointly study the feasibility of the proposed Trans-Panama Gateway Pipeline development.

The project scope would include one terminal on the Pacific side of Panama and another on the Atlantic with a pipeline connecting the facilities. This potentially would allow LPG shipments to bypass the Panama Canal. The canal, a vital passage for U.S. exports to Asia, has seen wait times tick up as natural gas shipments have surged.

“The MOU is to study the prospects further and could be an efficient way to expand markets in the long term,” an Energy Transfer spokesperson told NGI’s Shale Daily.

The nonbinding deal was signed by Energy Transfer Executive Chairman Kelcy Warren and Panama President Laurentino Cortizo Cohen. Energy Transfer said it would “expand Energy Transfer’s international operations into new markets while providing Panama the opportunity to establish itself as a distribution center of petroleum products to markets globally.”

Energy Transfer wrapped up an expansion at its Nederland, TX, terminal in December bringing its total LPG export capacity to about 500,000 b/d.

Governments, utilities and the nuclear industry hope small modular reactors will power Canada’s future. Can they actually build one?

Justice Department to step up enforcement of voting rights…

Exxon estimates up to 1 billion barrels in Brazil oil…