After seeing their massive distribution yields, it should come as no surprise that the Master Limited Partnership giants, Energy Transfer (NYSE:ET) and Enterprise Products Partners (NYSE:EPD) are favorites of income investors. Due to their operations being very similar, not only are they very comparable, but investors also gain little diversification benefit from holding units in both of them at the same time. This analysis looks at their relative valuations and, most importantly, which one gives an investor a lower risk of losing money in the long-term.

If the future growth potential of each partnership were exactly the same, then the choice would be very simple as Energy Transfer offers a significantly higher distribution yield of 14.30% versus 8.81% for Enterprise Products Partners. Even though they are very similar from an operational viewpoint, their finances are not quite as similar and thus there is a higher probability of the former reducing their distributions.

Although this may not be an ideal situation for the unitholders of Energy Transfer, it still does not necessarily mean that the difference between their respective distribution yields is justified, as the graph included below displays. By extension, it also does not automatically mean that their units have a higher probability of producing negative, long-term returns. 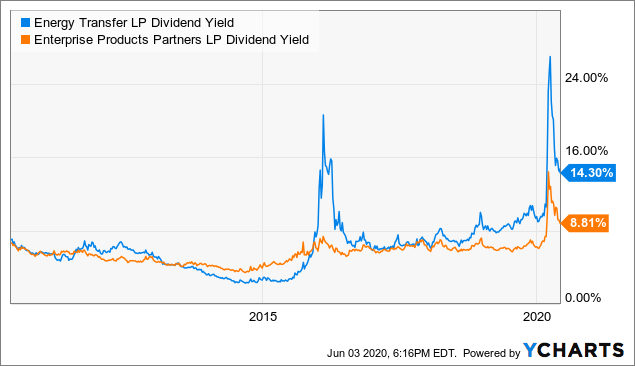 Arguably the single most important financial aspect for these two partnerships is their leverage due to their often discussed reliance on debt to fund either growth projects or distributions, depending on differing points of view. When looking at their respective leverage, it can be seen in the graph included below that Energy Transfer is moderately more leveraged than Enterprise Products Partners, although the difference has been narrowing during recent years.

Since both partnerships seem to have their leverage improving or trending sideways, it indicates that their distributions are fundamentally sustainable during normal operating conditions. Throughout the past six months, both of them have taken steps to reduce their reliance on capital markets for funding, which further supports their sustainability even throughout these recent uncertain operating conditions. At the end of the day, I believe that both partnerships have the fundamental ability to support their distributions going forward and that any possible reductions would only prove temporary. Given that this topic has been frequently analyzed over the past year, it seems rather redundant to provide any more coverage since the purpose of this analysis is to compare their valuations.

Since both of these partnerships are primary candidates for income investors, the intrinsic values were estimated by using a discounted cash flow valuation that simply replaces their free cash flow with their distribution payments. A moderate upper- and lower-end scenario was envisioned for both…