Is Energy Transfer Stock a Buy?

Until a few days ago North American midstream giant Energy Transfer (NYSE: ET) was sporting a huge 19% distribution yield. That level was Wall Street’s way of telegraphing a distribution cut, which showed up on Oct. 26. Even after a 50% haircut, though, investors might be salivating at the still high 10.5% yield. Here are some key factors to think about before you buy Energy Transfer for its huge yield.

1. Investors may not be number one

While it may seem like a lifetime ago given the current headwinds posed by COVID-19, in 2015 Energy Transfer agreed to buy peer Williams Companies. However, the energy industry was facing material headwinds at the time, and Energy Transfer decided that it wanted out of the deal. Essentially, if it chose to complete the merger, it would have had to either take on a huge amount of debt or cut its distribution (or maybe even both).
Image source: Getty Images.
On the surface, scuttling the merger looks like a shareholder-friendly move. However, a key piece of the effort was the issuance of convertible debt, roughly half of which ended up in the hands of the CEO. Investors should take issue with moves like that. Had the deal been consummated, the convertible debt the CEO bought would have effectively shielded him from the impact of a distribution cut.
The deal was eventually called off and Energy Transfer continued paying its distribution, but investors should question just how high they rank on management’s priority list. Note that the CEO in 2015 is still the CEO in 2020 (he’s set to step down at the start of 2021, but will remain chairman of the board).

Energy Transfer’s financial debt to EBITDA ratio was around 6 times at the end of the second quarter. That’s materially higher than that of more conservative peers like Enterprise Products Partners, which had a ratio of around 3.7 times. This is the norm, with Energy Transfer consistently toward the high end of the midstream industry leverage-wise.
Leverage isn’t a bad thing in and of itself. However, too much leverage does reduce financial flexibility during difficult times. Right now supply and demand are massively out of balance because the global pandemic has resulted in a steep decrease in energy use. While Energy Transfer was able to cover its distribution by a solid 1.5 times in the second quarter, it has a number of material projects that it also needs to fund. And, thus, it chose to trim the distribution so it could keep its investment plans intact. 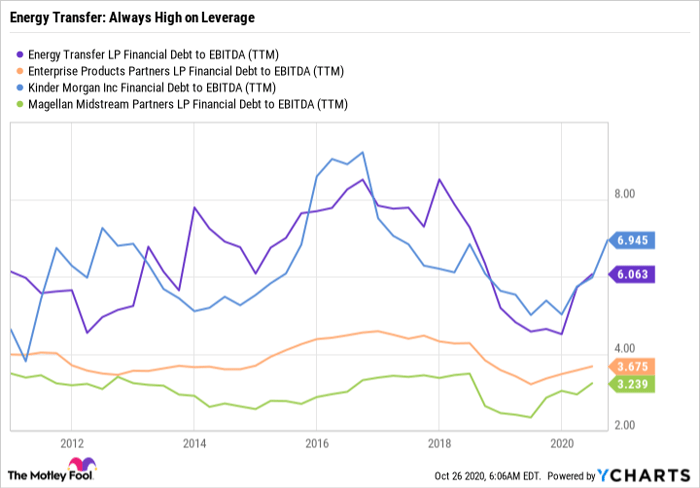 ET Financial Debt to EBITDA (TTM) data by YCharts
To put some numbers on the spending, the master limited partnership has another $1.6 billion worth of capital investments planned for 2020. And then another $1.3 billion in spending planned for 2021. Since it only generated $450 million in free cash after the distribution in the second quarter, it’s not that surprising that the distribution got cut in half.
While that puts to bed one concern, there’s still execution risk involved here. And with pricing and demand in the energy sector so weak, there’s a chance that all of this spending doesn’t work out quite as well as hoped. So while the distribution damage has been done, the leverage issue could still magnify any bad news that comes down the pike in an industry that’s facing material headwinds.

The last issue to consider before buying Energy Transfer is that this is not a simple name to get your head around. For starters, it is a master limited partnership, which comes with notable tax issues, including the need to deal with a K-1 at tax time. However, Energy Transfer is also the parent of two other master limited partnerships, Sunoco LP and USA Compression Partners. In other words, when you are looking at Energy Transfer you need to consider what’s going on at two more midstream businesses to really understand the situation. For conservative income investors these extra complications may not be worth the extra work.

Be careful if you are looking at Energy Transfer today because of its still huge yield. The distribution cut proves that Wall Street was correct to be concerned about the partnership’s prospects. But even after that bad news, investors still have other reasons to be worried here. That includes material capital spending plans over the next year or so, the complexity of the entity, and the history of perhaps putting management ahead of investors in the decision making process. All in all, there are likely to be better high-yield options available in the midstream space, such as Enterprise Products Partners.
10 stocks we like better than Energy Transfer LP
When investing geniuses David and Tom Gardner have a stock tip, it can pay to listen. After all, the newsletter they have run for over a decade, Motley Fool Stock Advisor, has tripled the market.*
David and Tom just revealed what they believe are the ten best stocks for investors to buy right now… and Energy Transfer LP wasn’t one of them! That’s right — they think these 10 stocks are even better buys.

The Best Hair-Treatment Oils, According to Stylists