India’s COVID travails have become the main talking point when it comes to Asian crude demand, once again pushing out the timeline of things finally settling down. China is gradually coming out of its planned maintenance, OPEC+ have already started to bring back part of the 2.1mbpd halted output that they committed to, in addition the United States and Europe are making strides in their vaccination roll-outs, however against all of the above developments it was the debilitation of India that has resonated the most with Middle Eastern oil producers. It need not be always reflected in their OSPs (official selling prices) for June 2021, however the Indian case will further hinder Asia’s demand. For instance, Saudi Aramco’s aggressive pricing policy meant less term nominations which in turn freed up those barrels for spot purchases – if India issues no purchase tenders, who will buy all those cargoes? The question might seem to be too banal to respond yet recent months’ aggressive pricing policy of the Middle East’s main trendsetter, Saudi Aramco, has compelled some buyers (even those operating in relatively low-impact countries such as South Korea) to nominate less than the total monthly quantity for May 2021. Saudi Aramco dropped the differentials of all its Asia-bound grades yet chose to do it sparingly, by 10-30 cents per barrel from May 2021 OSPs. On paper Aramco had every reason to do so, considering that the cash/futures spread for benchmark Dubai narrowed 15 cents per barrel from March, to 1.04 USD per barrel. At the same time, Aramco issued the June OSPs already knowing that demand was faltering, especially so for medium-to-heavy grades, and India’s descent into full-blown mayhem. Decrying the still-too-high differentials, many Asian analysts to predict another month of Saudi spot deliveries changing hands below the officially stipulated OSP.

Aramco has been much more adventurous in its Europe-bound OSPs, cutting all grades by 50-80 cents per barrel. Although regional competitor Urals has been weak throughout April, the Saudi OSPs coincided with Urals differentials firming up – thus, June might see an increased intake of Saudi cargoes amidst improving economics. Just as much as Saudi Aramco will be relishing the opportunity to ramp up oil production – by the end of June it would have brought back 0.6mbpd out of its voluntary 1mbpd OPEC+ commitment – yet it should remain cognizant of the challenges laying ahead. Most notably among them, Saudi Arabia’s GDP contracted 3.3% in Q1 2021, continuing last year’s decline when it declined 4.1% year-on-year on annualized basis. This means that despite the already hefty dividends that Aramco pays to Riyadh, this year will trigger even interdependence between Saudi Arabia’s budget controls and oil revenues. 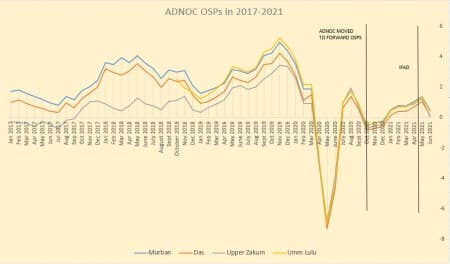 How oil capitalists conspired to spread climate change denialism — in 1988

Europe energy crisis could get much worse and cause high consumer bills, economic