“The average annual additional costs are ~0.62% of China’s GDP in 2020. It is a large but manageable value, especially recognizing that it does not account for the considerable external co-benefits of fossil fuel substitution, such as reduced health and agricultural damages from air pollution.” IMAGE@Cost increase in the electricity supply to achieve carbon neutrality in China

A new study in Nature Communications; Cost increase in the electricity supply to achieve carbon neutrality in China calculates the total new expenditure needed to replace fossil fuels for electricity by 2050 (along with the costs of three other less ambitious scenarios not discussed here)

This goal will entail a steady increase at today’s very rapid rate to meet a 2030 interim goal and ultimately to meet China’s goal for carbon neutrality by 2050.

“In this newest paper, that we have published in Nature Communications, we try to explore what this power system looks like if we want to achieve carbon neutrality in China’s electricity sector in 2050,” explained corresponding author Ning Zhang at Tsinghua University.

The study was conducted with the collaboration of Global Energy Interconnection Development and Cooperation Organization, and supported by the National Science Foundation of China on low carbon power systems. The research is not a direct deliverable commissioned by national government, but useful to support the government planning of power systems.

How much carbon neutral capacity, and how will costs change?

“So this is the first question that we are going to answer and the conclusion is that we need a lot, over 5.8 terawatts of wind and PV,” said Zhang.

“One important impact is that the government needs to realize that if we want to reach emissions peak in 2030, for the carbon neutrality by 2050, we need more renewable energy than we thought before.”

After 2030, as the grid’s carbon neutrality increases, the paper calculates for an increased load expected as industrial users start to switch from fossil fuels like coal for heating and cooling to electricity to cut their emissions. By 2060, China’s target is to achieve carbon neutrality economy-wide. Unlike most western nations where only a quarter of demand is industrial, in China, 68% of the demand on the grid is created by industry.

To achieve the carbon neutrality scenario while meeting projected 2050 power needs, the study estimates this would increase the cost of supplying electricity by almost 20%, to 8.4 cents per kWh in USD, at an annual cost to GDP of 0.62%.

The graph below shows which costs will be higher (blue) and which will be lower (orange) under the new generation planned for 2050.

For example, as coal use is decreased, the amount spent on coal power construction (CAP) and operation (OP) would drop sharply, while conversely, construction of renewable generation or to a lesser extent, its maintenance (MAI) would be higher as more is built. 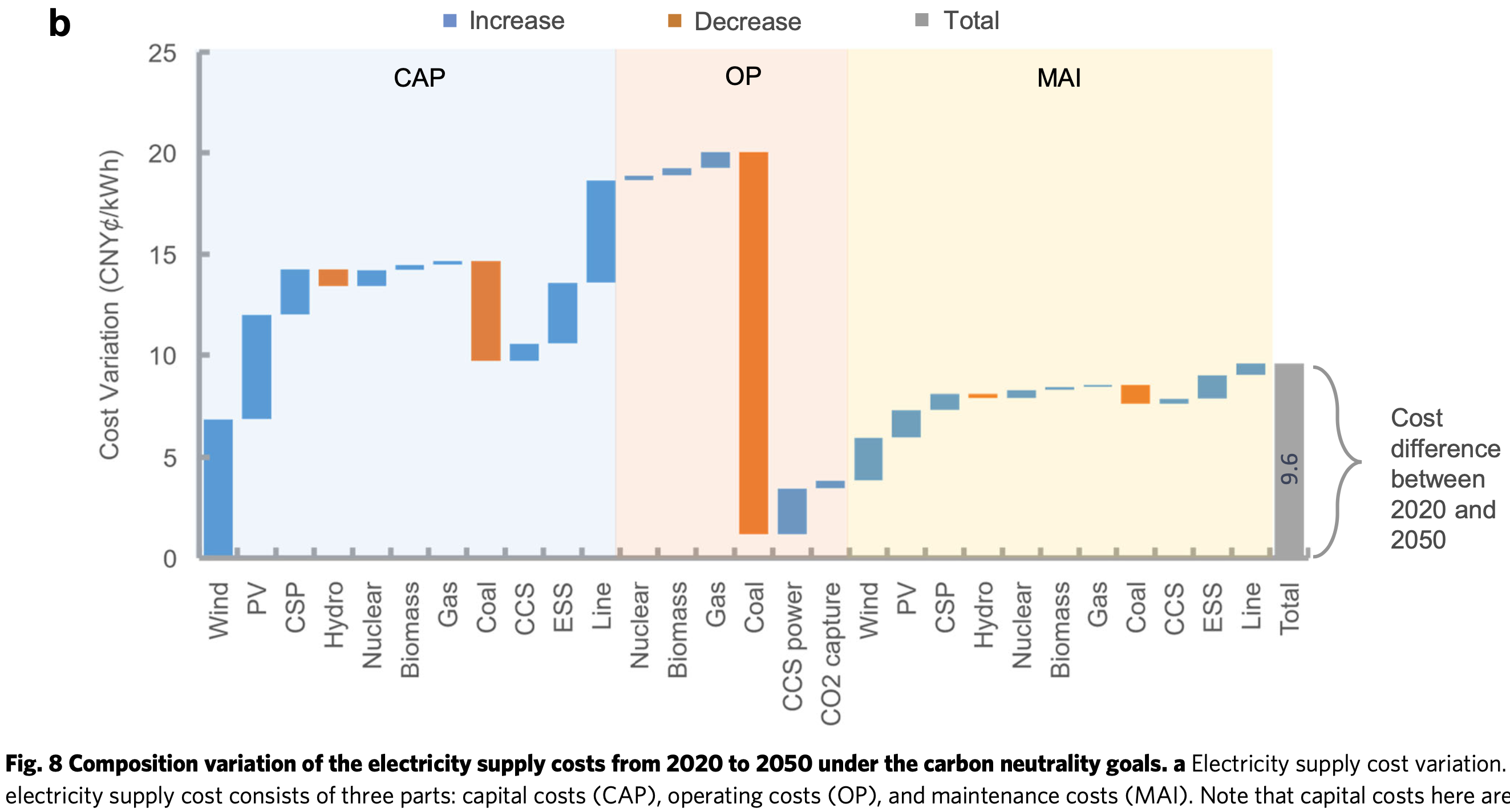 In China’s five provinces with the best solar resources (DNI) for Concentrated Solar Power (CSP), it has been included as a component of huge gigawatt-scale renewable complexes that typically include PV and wind. A complex with 700 or 900 MW of PV will typically include 100 MW tower CSP plant with thermal storage.(see China now has 30 CSP Projects with Thermal Energy Storage Underway).

Zhang noted that China is intentionally increasing storage in tandem with the increase of intermittent renewables. After the generation company chooses the land and makes proposals for developing renewable complexes, renewable proposals are assessed and commissioned by the national or provincial government depending on the capacity of the project.

”There is a policy that if there’s a large renewable energy it is better to have a relatively dispatchable or very stable output; so in that sense there is a ratio of CSP to PV and wind farm that can more easily get a steady output, an optimal portfolio so that you can avoid the penalty of large forecast errors that may have been penalized by curtailment.”

In the early years, China initially experienced high curtailment rates with its world-leading growth rate of PV and wind.

The paper states: In effect, an entirely new type of power system will be constructed, with wind and PV resources serving as the core in terms of power generation and various flexible generation resources serving as auxiliary service contributors. Large investments in ESSs, CSP units, and transmission lines will be required to meet the security requirements for the reserve capacity, minimum system inertia, and real-time power balance. Moreover, the interprovincial grid interconnection must be gradually transformed from a simple power transmission channel to a platform supporting bidirectional energy sharing between regions with different generation resources.

The benefit that CSP’s thermal power brings to stabilizing the grid is not just long-term thermal energy storage for dispatchable solar at a low cost, but also inertia from spinning mass.

“What we have found out is that with its synchronous generator that directly connects to the grid, the CSP will replace coal or gas to act as flexible resources to provide inertia in the future,” he said.

How can fossil fuel producers balance demand with an urgent need for change? –…

“Goodbye to them:” Victoria votes to end coal and make radical shift to…

Nuclear Power Is Declining in the West and Growing in…