HollyFrontier owns and operates refineries located in Kansas, Oklahoma, New Mexico and Utah and markets its refined products principally in the Southwest U.S., the Rocky Mountains extending into the Pacific Northwest and in other neighboring Plains states. In addition, HollyFrontier produces base oils and other specialized lubricants in the U.S., Canada and the Netherlands, and exports products to more than 80 countries. 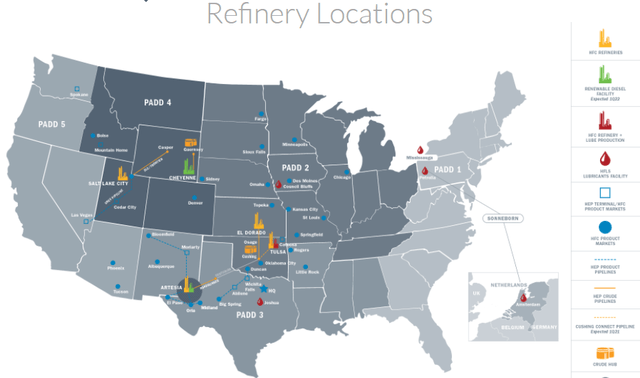 HFC is scheduled to announce third quarter earnings on November 5th. The current Zacks Consensus Estimate for the to-be-reported quarter is a loss of 50 cents per share on revenues of $2.4 billion. 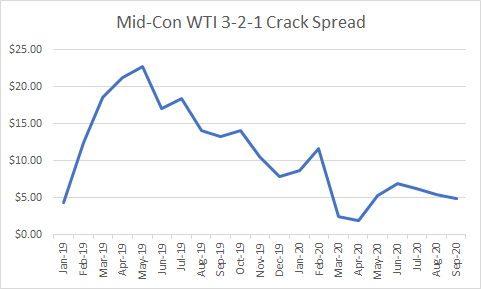 The Cheyenne Refinery was expected to close as of August the 3rd due to its conversion from a traditional fuels refinery into a renewable diesel facility (discussed further below). But management still expected to see improving throughput from second quarter to third quarter to the tune of about 10%. 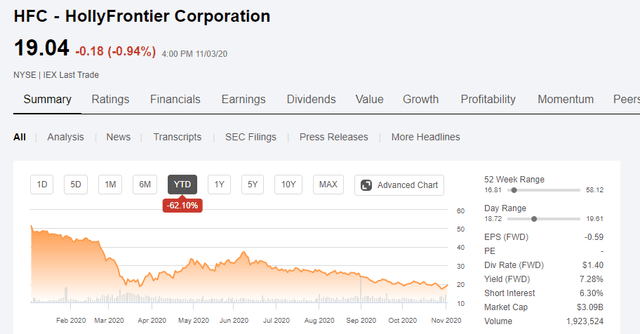 The future oil demand and pricing for a traditional refiner such as HFC appear gloomy due to ongoing pandemic conditions which have sapped oil consumption, creating a refining industry with excess production capacity that weighs on margins. No one really knows how long this is going to last, but Bill Gates, whose foundation is heavily involved in the development of vaccines and treatments for COVID-19, told New York Magazine’s Intelligencer on September 14, 2020:

In the very best case, two years from now, you would be, for some of the health things in particular, ideally back at where you were at the beginning of 2020. If we’re lucky enough that several of these vaccines work, including the ones that are low cost enough that we can scale the manufacturing,” Gates said. And if the vaccines can be mass-produced to “for the entire world,” then there is hope,” he said. “You hope it doesn’t stretch past 2022.”

Gates’ involvement with developers of treatments and vaccines gives him an “insider’s” view and should be heavily considered.

I find the renewable projects the most interesting long-term opportunity for HollyFrontier, which can differentiate them from the oversupplied refining industry. They are allocating $650 to $750 million for three projects: the construction of a pretreatment unit located at the Navajo Refinery, conversion of the Cheyenne Refinery to a renewable diesel plant, and construction of a pre-treatment unit located in Artesia, NM. These projects will be designed to produce over 200 million gallons of renewable diesel per year and generate $165 million in free cash flow, excluding the blender’s tax credit.

The Artesia Renewable Diesel Unit (RDU) is expected to produce ~120 million gallons per year of renewable diesel co-located at the Navajo refinery. Its estimated capital costs will be around $350 million, with approximately $140 million spend in 2020 and the balance in 2021. It is expected to generate an IRR of 20-30%. Its expected average free cash flow of ~$100mm per year, excluding the Blenders Tax Credit (BTC). It is estimated to be in-service 1Q 2022.

The Cheyenne Renewable Diesel Unit is a refinery conversion. They consider it similar in nature to a turnaround, though with a highly engineered new process. Utilizing existing infrastructure allows for shorter timeline and lower cost than greenfield construction and is expected to be in-service 1Q 2022. Its estimated capital costs are $125 to $175 million, predominantly in 2021 spend. It has an expected IRR of 20-30%, and its expected average free cash flow is estimated to be ~$40 million per year, excluding BTC.

The Pre-Treatment Unit will be constructed to provide flexibility and upgrade of feedstock. It will be designed to treat degummed “unrefined” soybean oil, bleachable fancy tallow and distillers corn oil. Estimated capital costs of $175-$225 million, $25 million in 2020, and the balance in 2021 and 2022. An IRR of 10-15% is the base case, but it is designed to protect the returns of the renewables business against potential volatility in the feedstock markets. Its expected average free cash flow of ~$25 million per year and is estimated to be in-service the first half of 2022.

Renewable diesel is a huge priority for us, we are very excited about it. It’s a large capital deployment for this company in the $650 million, $750 million range. But in terms of the earnings accretion of these projects and the change in our business profile, I see a lot of value in it. And I see it as a really strong platform to continue to advance HollyFrontier and the earnings capacity, cash generation capacity of the company. So that’s a real bright spot.”

HFC’s traditional refining business will likely struggle through 2021, at least, due to the impact of the pandemic. However, in 2022, the renewable diesel projects are expected to come online and become a meaningful part of HollyFrontier’s cash flow and diversify from traditional petroleum fuels refining.

For the short term, the share price will likely drift lower. But, at some point in 2021, it may be an attractive buy.

To guide investors who are interested in profiting from outstanding opportunities in the energy sector, I provide a service on Seeking Alpha’s Marketplace oriented toward individual investors, Boslego Risk Services. A long/short Model portfolio is continuously updated, along with on-going analysis of the oil market.

I am now accepting new members to Boslego Risk Services and invite you to sign-up. There are monthly and annual pricing options as described here. You may also read reviews posted by members here.


Disclosure: I/we have no positions in any stocks mentioned, and no plans to initiate any positions within the next 72 hours. I wrote this article myself, and it expresses my own opinions. I am not receiving compensation for it (other than from Seeking Alpha). I have no business relationship with any company whose stock is mentioned in this article.

Gran Tierra Energy ‘quite comfortable’ in its forecasts to produce…

Biden: Trump can’t be allowed to open Grand Canyon for…

‘We were not able to achieve the commercial success needed…

You down with VPPs? How the virtual power plant movement is…