In the letter, Senators Elizabeth Warren, Sherrod Brown, Jack Reed and others warned that the seven-year high in gas prices has “placed an undue burden on families and small businesses trying to make ends meet.”

“In light of these pressing concerns, we ask that you consider all tools available at your disposal to lower US gasoline prices. This includes a release from the Strategic Petroleum Reserve and a ban on crude oil exports,” the lawmakers wrote.

Industry experts are skeptical that tapping the SPR would deal a lasting blow to gas prices, and they have warned banning oil exports could backfire on US consumers.

The national average price of gasoline rose to $3.42 a gallon on Monday, up from $2.11 a year ago, according to AAA.

The Democrats said they share the Biden administration’s concerns that the decision by OPEC and others to “purposefully manipulate gas prices by constraining supply, as well as the choice of domestic leaseholders and producers to continue to export US petroleum, threaten to send already record prices even high.”

“Continued US exports and overseas supply collusion could be devastating to many in our states,” the Democrats wrote.

Energy Secretary Jennifer Granholm confirmed to CNN’s Dana Bash over the weekend that the SPR is “one of the tools” Biden has and “he is looking at that.” Granholm suggested action could come as soon as Tuesday when a new government forecast on energy supply and demand is due out. 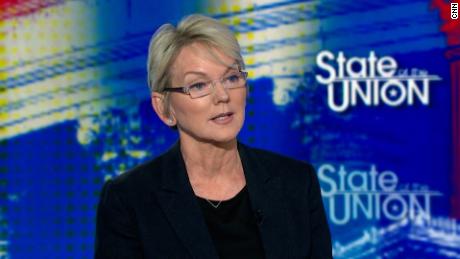 Yet oil watchers have said tapping the SPR will not solve the underlying problem: Supply is struggling to keep up with demand. Goldman Sachs has previously estimated that an SPR release would only be of “modest help,” lowering the bank’s year-end forecast for Brent oil — the global benchmark — by just $3 a barrel.

“It will have a minor impact on prices, unless they do a massive, massive release,” Francisco Blanch, Bank of America’s head of global commodities, told CNN last week. “It won’t kill the rally.”

And some argue that banning US exports of oil would ricochet back on US drivers.

The problem is that oil is a globally traded commodity — and US gas prices are set by Brent. If the world suddenly lost access to US oil, Brent crude prices would likely rise due to weaker global supply. And US oil refiners require access to foreign oil to produce gasoline, jet fuel and diesel. They can’t rely on US oil alone.

That’s why Goldman Sachs told clients last month that an export ban would likely be “counterproductive” and would have a “likely bullish impact” on retail fuel prices.

Robert McNally, president of consulting firm Rapidan Energy Group, agreed that banning oil exports would be counterproductive, and added that the abrupt shift in policy would spook investors and further reduce investment in US domestic shale.

“Banning oil exports would be a macro, not just energy, own-goal,” McNally told CNN in an email.