In the 20th century, oil became a major geopolitical weapon, most notably during OPEC’s 1973 oil embargo which caused a cataclysm shift in global power relations. OPEC continues to utilize this weapon to influence policy in the 21st century. Today, however, we are witnessing the development of another energy-related weapon that OPEC does not control: CO2. The power of CO2 was recently displayed by China when it signaled to the U.S. that it would not comply with its climate and decarbonization efforts if the U.S. continued accusing China of genocide. At the same time, China is increasing its reliance on coal, which will impact the global emissions targets set by Net Zero nations and allies. Notably, atmospheric CO2 from emitting countries is not beholden to terrestrial land borders.

It is unlikely that China will be the last nation to utilize its CO2 emissions as a geopolitical weapon. Ultimately, it is at the discretion of sovereign states as to whether or not they uphold their oil consumption, CO2 emissions, and decarbonization goals. On the other hand, it is not beyond the realms of possibility that Net Zero nations will enforce climate policies on emitting countries that do not conform to climate objectives. Such CO2 policy enforcement aligns with Von Clausewitz’s view of “war [being] a mere continuation of policy by other means.” Importantly, U.S. Defense Secretary Lloyd James Austin III, declared that climate change is an existential threat to America and that globally, “the climate crisis…[makes it] difficult for us to carry out our mission of defending [the U.S.] and our allies.”

A Blueprint for Weaponization

OPEC members Iran, and Venezuela have been targeted with oil sanctions by the U.S., impacting their respective economies (sanctions are at times compared to economic warfare). However, CO2 enforcement (should it arise by sanction) would be much more challenging to control compared to the flow of oil as CO2 is not beholden to waterborne or piped transportation: it spreads unhindered into the atmosphere, disregarding terrestrial sovereignty. It is this fact that makes the achievement of the Paris Agreement, which counts on over 100 nations working together to arrest global warming, so difficult. Just as nuclear weapons are viewed as an existential threat to nations, atmospheric CO2 (as emphasized by U.S. Defense Secretary Austin III) is now gaining a similar status. Regarding nuclear weapons, it is not surprising that Iran has utilized its nuclear potential to sway policy, as reflected with the Obama administration (and subsequent administrations); while North Korea flashed its nuclear capability to impact geopolitics, by launching missiles into the Sea of Japan just this year. It stands to reason that certain nations may expand on the CO2 weapon for geopolitical purposes (as China did earlier this year), as opposed to the nuclear option. Taken a step further, nations with spare capacity to increase CO2 output (on demand) can initiate a CO2 war, which is similar to Saudi Arabia utilizing its spare oil-producing capacity to achieve geopolitical objectives, as highlighted by the 2020 oil war. Here too we see the interconnectedness of oil and the prospective CO2 weapon.

An Organization of Emitting Countries

Presently, Canada, Japan, the U.S., and the U.K., are not only members of the G7 coalition, but also signatories of the Paris Agreement, which by default forms a Net Zero coalition. It remains to be seen if this Net Zero coalition will be the one to enforce decarbonization policies. However, the potential for a CO2 coalition could lead to the formation of an Organization of Emitting Countries (OEC) to counterbalance a Net Zero coalition. Thus, OPEC may be inclined to band with CO2 emitting nations, being that various OPEC countries rely on oil production to fund their nations. Additionally, the growth and/or development of OPEC and non-OPEC nations’ GDP is linked (to some extent) to access and consumption of CO2 emitting energy, as noted by Vaclav Smil. Weaponizing CO2 can be actioned to not only impact policy and geopolitics but also to have an organization collectively shield their economies and resources from a Net Zero coalition.

Countries that have not reached the same level of development as the G7 coalition may not be as inclined to stop their reliance on CO2 emitting energy (as it’s linked to economic growth). Case in point: Guyana is experiencing and expanding on its offshore-oil Bonanza, and is not inclined to cut its emissions, as highlighted by Guyana’s Vice President, Bharrat Jagdeo, at the Offshore Technology Conference held in August. The International Monetary Fund projects Guyana to be the “4th largest growing economy in 2021.” While its southern neighbor, Suriname, is making pivotal offshore discoveries. Thus, the incentive to decarbonize has a different appeal for different countries depending upon where on the development ladder they find themselves. Moreover, India, much like China, is increasing its reliance on coal. 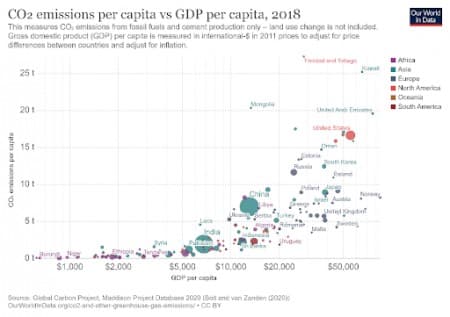 It is key to consider the possibility and the logic that Net Zero nations, which take a firm stance on emissions, may apply the approach espoused by Von Clausewitz via “the continuation of policy by other means.” By applying Net Zero reinforcement by way of actionable policy, developed nations can exercise their decarbonization options, which may not align with those of developing nations. On one hand, developed nations will be able to introduce policies to influence developing nations, but on the other hand, an Organization of Emitting Countries (via OPEC and developing nations, for instance) could utilize CO2 as a weapon to offset said policies. The Energy Transition will involve walking a tightrope in this regard, as nations on both ends of the CO2 spectrum will feel they are in the right.

Oil palm in the Northeast: Can we do it better?

China’s Power Crisis Moves From the Factory Floor to Homes

What’s behind the surge in Irish and European energy prices this year?

Your gas stove, furnace, and clothes dryer may be hurting the climate and polluting…