A nuclear reactor is proposed for Wyoming. One small town hopes the plant will restore its economic fortunes. | Energy Journal


The Dave Johnston Power Plant in Glenrock is surrounded by infrastructure that could be utilized by a nuclear reactor if the site is selected by Rocky Mountain Power and TerraPower. Four towns are being considered for the project. 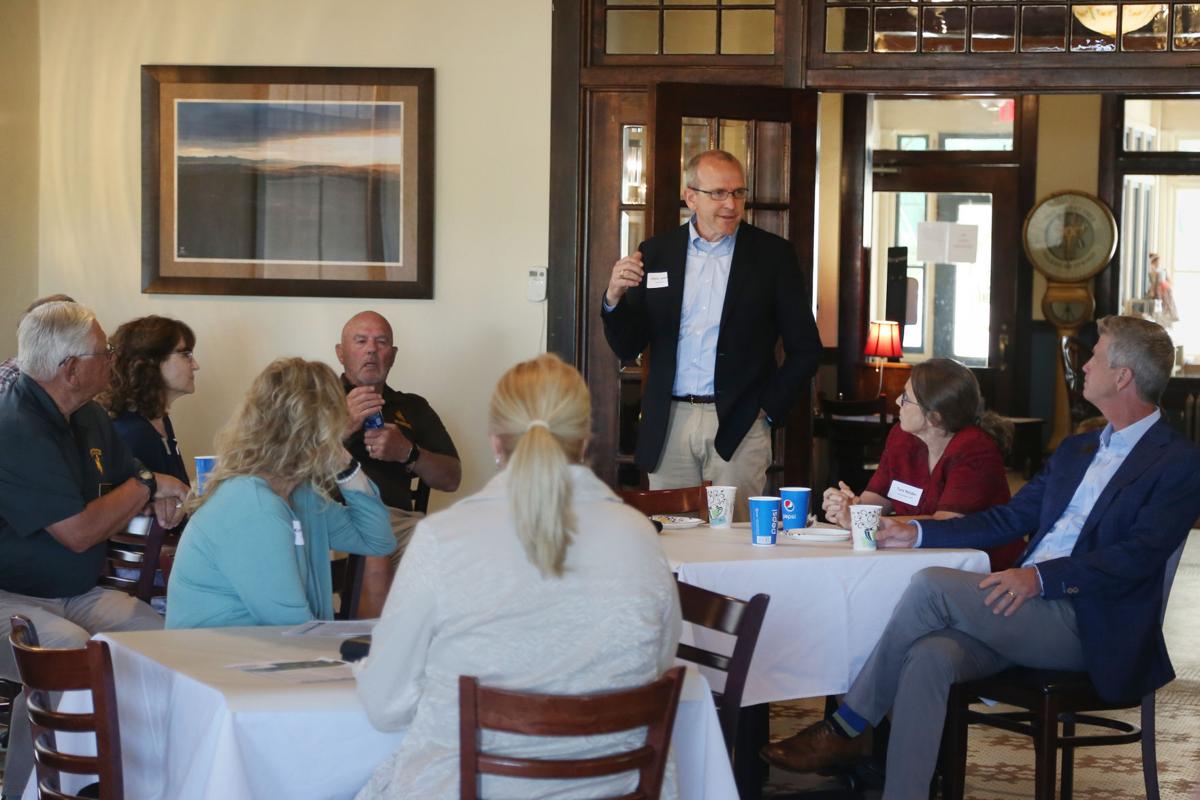 Chris Levesque, president and CEO of TerraPower, talks about the proposed plan to build a nuclear reactor at the site of a decommissioned coal plant in Wyoming at a public meeting Wednesday in Glenrock. Developers plan to pick the site of the nuclear project by the end of the year.
Some communities would balk at the idea of a company building an experimental power source on the edge of town. Glenrock is not one of them.

Before the end of the year, developers of a new type of nuclear power plant will decide which of four Wyoming towns will house their project, and Glenrock wants to be selected.

During a Wednesday meeting with the heads of TerraPower and Rocky Mountain Power, community leaders listened attentively to the companies’ pitch. Most were already on board with the project. A few safety questions did come up, but Glenrock’s leaders wanted to focus the conversation on logistics — not risk.

The town’s coal-fired power plant, Dave Johnston, is set to retire in 2027, taking 191 jobs with it. The Natrium reactor is scheduled to come online the following year, generating an estimated 250 permanent jobs. Its developers intend to establish training programs to help workers in the selected community transition from their current jobs at the coal plant to new roles at the nuclear facility.

Glenrock is a town of just 2,600 people; Converse County’s entire population numbers fewer than 14,000. The community’s history is intertwined with that of the energy sector. Many see the nuclear plant not only as a natural transition, but a necessary one for their economic survival.

“We have a history of energy developments in our community, going way, way back,” Glenrock councilwoman Margaret Nunn said during the meeting. “One, we opened coal mines. Two, we built a power plant. Three, we mined out the coal and reclaimed the land. Four, we built a new wind farm where the coal mine once was. Five, our power plant has outlived its time. So what is number six in our energy history?”

In a sense, the two parties are equal partners in the arrangement. Each one is attempting to persuade the other that they’re worth the investment. But with many local leaders already convinced of the project’s potential benefits, it’s the developers’ choice to make.

“What do we need to do, collectively, to ensure that the plant lands here?” Converse County Commissioner Robert Short asked the executives.

Their answer: Be enthusiastic. And get lucky. All four possible sites have already undergone preliminary evaluations and been deemed viable. The companies want to build the plant in a supportive community with demonstrated economic need — criteria Glenrock meets. But just as important are business concerns like infrastructure and access to services, along with factors such as seismic activity, which can affect permitting eligibility.

A decision is expected before the end of the year. Until then, the community can do little more than wait and hope. The other three towns in contention, Gillette, Kemmerer and Rock Springs, will do the same.

In 1957, when the experimental Shippingport nuclear reactor was completed in Pennsylvania, the U.S. proved that water cooling technology was market-ready, leading to the construction of 100 water-cooled nuclear reactors nationwide and 400 around the world, said Chris Levesque, president and CEO of TerraPower. Levesque believes the Natrium reactor will similarly inspire a new generation of nuclear development.

The TerraPower plant is distinguished from standard U.S. nuclear facilities in part by its cooling system: Instead of pressurized water, the core temperature will be maintained using liquid sodium — the metal, not the salt. Because sodium has a much higher boiling point than water, it does not need to be pressurized to prevent it from vaporizing, reducing the plant’s need for the controlled systems used to keep cooling water in place and allowing it to rely more on natural forces like convection and gravity.

“We used a lot of supercomputing and advanced metallurgy to design it,” Levesque said, “but the plant itself is actually simpler than a lot of plants today.”

The reactor is also designed to operate more efficiently, producing one-third as much waste as existing nuclear plants. It will require less human intervention, including in the case of any malfunctions, a feature its developers say makes it much safer than water-cooled facilities. Its modular nature allows it to be built in sections, with additional generating capacity added later.

But the project’s energy storage system, which reserves generated energy in tanks of molten salt during times of low demand and releases that energy to the grid when demand rises, is what makes the TerraPower plant particularly distinctive.

Dave Johnston has a capacity of 922 megawatts. The Natrium reactor’s capacity is lower, at 345 megawatts. But its energy storage system enables the facility to increase its output to 500 megawatts of power for more than five hours at a time. Because of its added storage capacity, the plant will be dispatchable, and therefore much more valuable to Rocky Mountain Power.

“Dispatchable resources are things like hydro plants, coal plants, natural gas plants, our geothermal plant — places that that, if you see customer demand coming up throughout the day, you can call on a specific resource, and know that you’ll have the extra 100 megawatts that you need, when you need it,” David Eskelsen, a spokesman for Rocky Mountain Power, said during an interview with the Star-Tribune.

Your membership makes our reporting possible.

Renewable energy sources like wind and solar are variable, not dispatchable, meaning they’re hard for utilities to rely on. Most nuclear plants are technically dispatchable, but take too long to activate to meet immediate demand.

As the electric grid is powered increasingly by variable sources, dispatchable sources like battery storage will be required to supplement them. And as coal plants continue to go offline, the reactor’s developers — who say they’d like to one day build reactors at all four sites — hope it will help to fill the energy niche that is left behind.

From the coal plant to a nuclear island

By building the nuclear facility on the site of a retiring coal plant, developers will have access to an available workforce and cost-saving resources like current water permits and electric grid connections.

“We are able to leverage the existing technical infrastructure that’s there, but also the expertise,” said Tiffany Erickson, media relations manager for Rocky Mountain Power, in an interview with the Star-Tribune.

Representatives of Rocky Mountain Power and TerraPower have repeatedly emphasized the companies’ plan to hire as many local workers as possible and provide training to those workers when necessary.

“The intent is to work with community colleges and [the University of Wyoming] on developing training and reskilling programs,” Erickson said.

While the reactor itself will be built according to strict nuclear regulations, the part of the plant that generates electricity will be constructed some distance away from the reactor, which its developers are calling the “nuclear island.” The portion producing electricity will face looser permitting requirements and, unlike the reactor, will operate similarly to generators in other types of power plants.

“There’s a lot of jobs in this nuclear island, and they’re very different,” Gary Hoogeveen, president and CEO of Rocky Mountain Power, told the Glenrock community. “Now, some of the people will be able to, if they’re interested, retrain and have those jobs. But the people that are mechanics, it’s the same low-pressure system that they were working on, and they’ll have the ability to translate their expertise directly over.”

Natrona County Commissioner Dave North told the Star-Tribune that he expects the plant to provide good jobs and a constant power supply to Natrona County in addition to Converse County.

“I think it’s a positive all the way around,” he said.

Aside from concerns raised by conservation groups like the Powder River Basin Resource Council, little opposition to the reactor has been expressed publicly. And though nuclear is always divisive, the project’s appeal stretches across party lines — potentially improving its chances as it navigates the short, seven-year development timeline set by the Department of Energy, which provided half its funding. The other half comes from private sources, including TerraPower founder Bill Gates.

Levesque said Democrats favor the project’s low carbon footprint, while Republicans see it as a source of energy security.

“The great thing about the program is there’s something in it for everybody,” he said.

Converse County Chairman Jim Willox told the Star-Tribune that nearly all of his concerns were addressed during the meeting. For him, siting criteria are the sticking point. He hopes that by learning more about what the companies are looking for, he can help Converse County present itself as the most attractive location for construction.

The nuclear plant could save Glenrock from a fate like that of Jeffrey City, a uranium boomtown that collapsed along with the industry in the 1980s. Loss of the coal plant without construction of the reactor would not be a death sentence — Lander, a former iron town, managed to diversify its economy after its mine shuttered — but would spell a much harder recovery for the town.

“If we lose the power plant and it’s shut completely down, that would affect us a great deal. It trickles down all the way through the business community, in the schools, all of our special districts — we would lose a lot when this power plant shuts down,” Converse County Commissioner Tony Lehner said after the meeting.

“If we don’t get this first one, then I hope to heck we get the next one,” he said.

With a weekly newsletter looking back at local history.

Read More: A nuclear reactor is proposed for Wyoming. One small town hopes the plant will restore its economic fortunes. | Energy Journal

Sunak signs off on £18mn public information campaign to save energy