Last updated May 1, 2021
Share FacebookTwitterReddItWhatsAppPinterestEmailLinkedinTumblrTelegramStumbleUponVKViber
A pipeline that once transported crude oil from Paramount to Carson through residential areas in North Long Beach will be converted to transport hydrogen gas. This is part of an ongoing effort from biofuel company World Energy LLC to convert its recently acquired oil refinery in Paramount to produce hydrogen gas—a key component in the industry of renewable fuels.

The pipeline runs from Downey Avenue in the east along a large portion of Market Street all the way down toward the Carson city limits in the west. World Energy is planning to add a half-mile of additional pipelines within Carson. Carson city officials approved the environmental impact review for the additional pipeline project in November 2020. 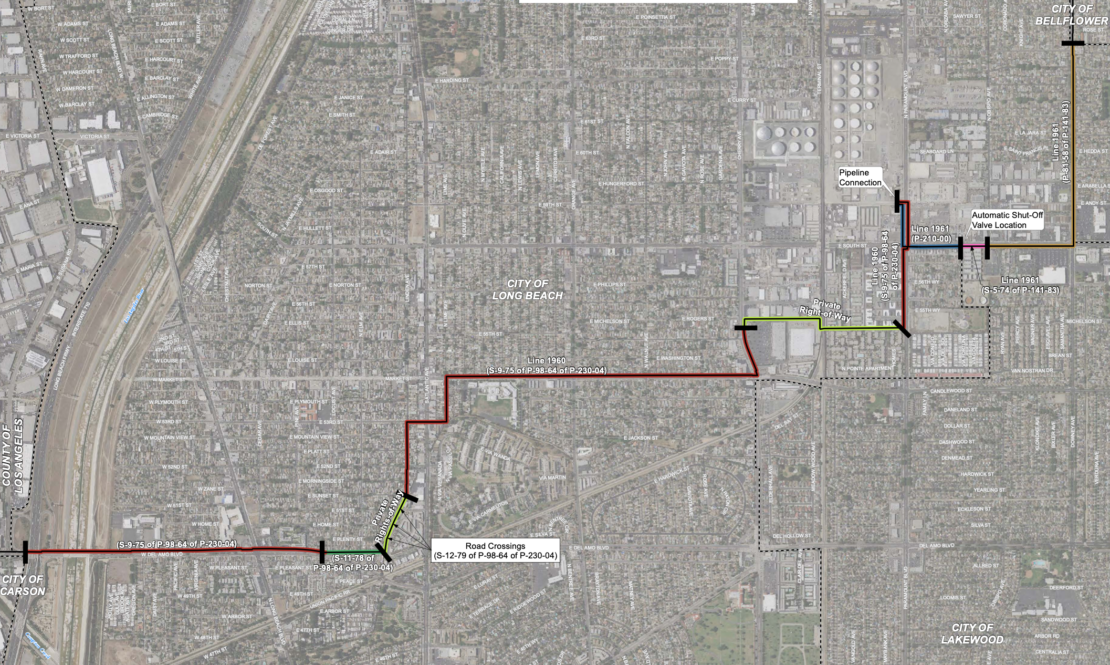 The most notable hazard, categorized as “significant and unavoidable” in the report, is the potential release of hydrogen gas into the environment.

According to the California Environmental Quality Act findings report, Long Beach officials found that the project creates a “significant hazard to the public or the environment through reasonably foreseeable upset and accident conditions involving the release of hazardous materials into the environment.”

Mitigation measures were incorporated into the project to reduce this impact, but even with the inclusion of these measures, the impact cannot be reduced to less-than-significant levels, the report reads.

No feasible measures were identified in the final environmental impact report that would mitigate this significant adverse impact to below a level of significance, according to the findings.

To address this concern, the mitigation plan states the pipeline should be operated at a capped maximum pressure and the operator must regularly monitor the pipeline for leaks.

“It gets rid of a crude-oil operation and makes it into hydrogen fuel, and that’s a use toward zero-emission vehicles,” Richardson said. “But since it’s under our homes in Council Districts 8 and 9 we need to make sure that diligence is done and that’s what has been done.”

“This is a better use of existing infrastructure that will result in cleaner energy use in our city and beyond,” he said.

Austin asked how nearby residents would be notified of the project and its potential harms. Patricia Diefenderfer, Long Beach Planning Bureau manager, said the pipeline operator, Paramount Pipeline, would distribute notifications at about 8,000 different properties along the pipe’s path to inform neighbors about safety measures and who to call in an emergency.

Joining the council’s brief discussion on the pipeline was Jeffery Ewart, a Paramount Pipeline representative. He said that the company would operate the pipeline at low pressures and gradually increase it to check for leaks. Ewart said residents should have been similarly notified about the pipeline when it was used previously for crude oil.

“It’s going to take two to three days to commission the line into hydrogen and make sure there’s no leaks, and then the mail-outs will be coming out as well,” he said.

Nobody from the public spoke about the pipeline at the council meeting.

World Energy is a large seller of biofuels and is in the process of converting a former oil refinery in Paramount to a state-of-the-art, low-carbon fueling hub.

Hydrogen is a necessary component in the production of renewable fuels. The request to convert the existing pipeline is to facilitate the manufacturing of biofuels at the Paramount plant.

Votes in Congress: How Virginia’s U.S. senators voted this past week – The Daily Progress

‘I’m not selling’: what happens when an Australian town is consumed by a US coalminer? | Coal

APA Corp. Scours the Globe for Oil and Gas. Its Stock Could Surge.

Why Oman Crude Could Meet Asia’s Growing Demand for Oil

Weeks after oil spill, Coast Guard aims to bring boat back to surface

Biden Build Back Better framework struggles to win over…

Capitol riot probe must uncover what happened at Trump White…