Colombia’s Oil Industry Is On The Brink Of Collapse

Colombia’s oil industry is yet again under considerable pressure, despite the national government in Bogota attempting to reactivate the economically crucial sector. The March 2020 oil price crash, COVID-19 pandemic, rising security risk and now significant political turmoil are weighing heavily on the oil industry’s performance. After a rough 2020 where Colombia’s five-month long quarantine lockdown sharply impacted operational activity and crude oil production, there are signs that the Andean country’s oil industry is struggling to recover. This comes after a moment of optimism in late-2020 where it appeared that Colombia’s hydrocarbon sector was on track to return to a pre-pandemic tempo of operations. The latest data from the energy ministry for Latin America’s fourth largest economy indicates that is not the case. During March 2020, Colombia pumped a daily average of 744,715 barrels of crude oil and 1.2 million cubic feet of natural gas, which is a 0.14% and 5% less than a month earlier.

More worrying are signs that Colombia’s hydrocarbon sector is struggling to recover from a devastating 2020. A reliable de-facto indicator of industry activity is the Baker Hughes rig count. The latest data shows that by the end of April 2021 there were only 16 active drill rigs in Colombia, which while 2 more than a month earlier is nearly half of the 30 operating at the end of April 2019. 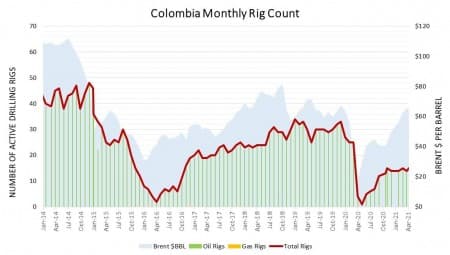 A key reason for the sharp decline in drilling activity is a lack of investment. According to Colombia’s leading industry body the Colombian Petroleum Association (ACP – Spanish initials) oil companies will invest (Spanish) $3.1 to $3.45 billion during 2021. While that is significantly higher than the $2.05 billion invested in 2020, it is still substantially less than $4.03 billion industry investment made during 2019. Colombia’s high breakeven prices, estimated to be around $40 to $45 per barrel after-tax, are a deterrent to investment. Breakeven prices for onshore oil projects in the Andean country is significantly higher than many other Latin American jurisdictions including offshore Brazil and Guyana.

Colombia’s primary crude oil grades are Castilla, Magdalena and Vasconia which have API gravities of 18.8, 20 and 24.3 degrees with sulfur contents of 1.97%, 1.6% and 0.83%, respectively. Demand from refiners for sour medium and heavy crude oil varieties is falling because of the global push to reduce sulfur emissions, which led to the introduction of IMO2020 at the start of last year which capped sulfur emissions for maritime fuels. Heavier sour crude oil grades are also more costly and difficult to refine into high grade gasoline, diesel and other fuels than lighter sweeter varieties of crude oil. For those reasons Colombia’s crude oil grades sell at a notable discount to Brent, which during times of market stress had historically widened considerably. During March 2020, when a price war between Saudi Arabia and Russia emerged, Vasconia was selling at a $7.75 per barrel discount to Brent, but by March 2021 that discount had eased to be around $5 per barrel. That is also weighing on foreign investment in Colombia’s struggling and economically vital petroleum industry.

A spike in violence in the strife-torn Andean country poses a threat to oil industry operations. Colombia has been rocked by anti-government protests for nearly three weeks and blockades have been set-up on major roads preventing in some regions, especially around the country’s third largest city Cali, the movement of people and goods. Violent incursions into oilfields, notably in Colombia’s east around the municipality of Puerto Gaitan in the Llanos Basin, are intensifying as the petroleum industry’s social license unravels. Heightened political turmoil and elevated conflict are weighing on foreign investment in Colombia’s economically vital oil industry.

The combination of weaker oil prices, the COVID-19 pandemic, a growing security crisis and weaker than expected oil production are sharply impacting Colombia’s economy. Bogota’s 2021 budget deficit is expected to reach 9% of gross domestic product, the March 2021 unemployment rate stood at 14% and first quarter 2021 GDP plunged 9% compared to the previous quarter. The contribution of petroleum extraction to Colombia’s first quarter 2021 GDP fell almost 4% quarter over quarter and by 15% compared to a year earlier, despite oil prices rallying significantly since the start of 2021 to see Brent up by around 36%. Those poor numbers indicate how important it is for Bogota to restart Colombia’s economically crucial petroleum industry, which is struggling to reach a pre-pandemic tempo of operations because of a third viral wave and heightened violence. The Duque administration’s inadequate management of the pandemic and inability to reactivate the hydrocarbon sector, coupled with its impotence when it comes to controlling rising lawlessness, poses a direct threat to Colombia’s economic recovery.

By Matthew Smith for Oilprice.com

Read More: Colombia’s Oil Industry Is On The Brink Of Collapse

North Dakota oil production slips to No. 3 behind New Mexico

Will nurses, doctors & staff stick it out at hospitals…