On Mar 21, 2021
Share FacebookTwitterReddItWhatsAppPinterestEmailLinkedinTumblrTelegramStumbleUponVKViber
Environmental organizations and activists have written to the US special presidential envoy for climate change, John Kerry, charging that an agreement between companies in Israel and the United Arab Emirates to use Israel as a land bridge for the transport of crude oil from the Persian Gulf to European markets is “contrary to the new spirit of Israeli-US climate cooperation.”

“We have specific environmental concerns relating to the likelihood of oil spills in the Gulf of Aqaba [that could endanger] the unique coral reefs of Eilat in Israel, the Sinai Peninsula [in] Egypt and Aqaba in Jordan,” read the letter, which also warned “of the pipeline potentially polluting the unique ecosystems of the Arava and Negev deserts” and of “oil spills occurring off the Mediterranean coast of Israel.”

It continued, “No less significant, we believe that the project is contrary to the new spirit of Israeli-US climate cooperation that we were so pleased to learn about following conversations [that] we understand have been held with Israeli Ambassador to the US Gilad Erdan.”


In February, Kerry and Erdan spoke on the phone and discussed “the environmental challenges we are facing,” according to a tweet from the latter, a former environmental protection minister, who also serves as Israel’s ambassador to the UN.

“I told him I would be a soldier in the fight against climate change. We agreed to meet soon to explore new initiatives and discuss the vision of zero carbon economy,” he said.

The oil deal followed September’s signing of a bilateral normalization agreement between Israel and the United Arab Emirates, part of the so-called Abraham Accords.

The letter to Kerry concluded, “Given the leadership of the former US administration in initiating and negotiating these important [Israel-UAE] Accords and the interest of the new administration to continue to build on these Accords, we believe it is important that the Accords be aligned to combating the climate crisis and not be misused in a manner that both risks our fragile environment and runs contrary to declared US-Israeli commitments.”

The letter was part of an ongoing bid by environmental organizations and others to try to halt implementation of a memorandum of understanding signed in October by the state-owned Europe-Asia Pipeline Co., formerly the Eilat-Ashkelon Pipeline Co., with MED-RED Land Bridge, a joint Israeli-UAE venture, to transfer oil and oil-related products from the port of Eilat on the Red Sea to the Mediterranean port of Ashkelon via an overland oil pipeline built in the 1960s.

The letter was signed by the heads of Zalul, EcoOcean and The Coast Patrol, all marine environmental organizations, as well as the chairpeople or directors of the Eilat Conservation Society, EcoPeace ME, the Arava Institute for Environmental Studies, Home Guardians and Green Course. The CEOs of the Eilat Eilot Renewable Energy Initiative and the solar power company Energiya Global Capital also signed.

Most Gulf oil currently passes through the Suez Canal or Egypt’s Sumed pipeline and, over recent years, no more than two or three tankers have docked annually at EAPC’s Eilat terminal, mostly carrying oil from Russia and Central Asia en route to the Far East.

Faithful Warrior, an oil tanker filling up at the EAPC terminal in Eilat, in southern Israel, from January 8 to 9. (Mori Hen, of the not-for-profit Desert and Sea Environment, Eilat)

Since January, though, nine tankers have docked at the terminal.

The EAPC-MED-RED Land Bridge deal, which could bring the state-owned company an estimated $700 million to $800 million over eight years, according to Reuters, allows for up to 120 oil tankers containing up to 7.9 billion gallons (30 million cubic meters, or 200,000 barrels) of crude oil and oil byproducts to use the existing EAPC port in Eilat each year.

Some 250 scientists have signed a petition opposing the EAPC deal and Eilat residents have been regularly protesting the move. 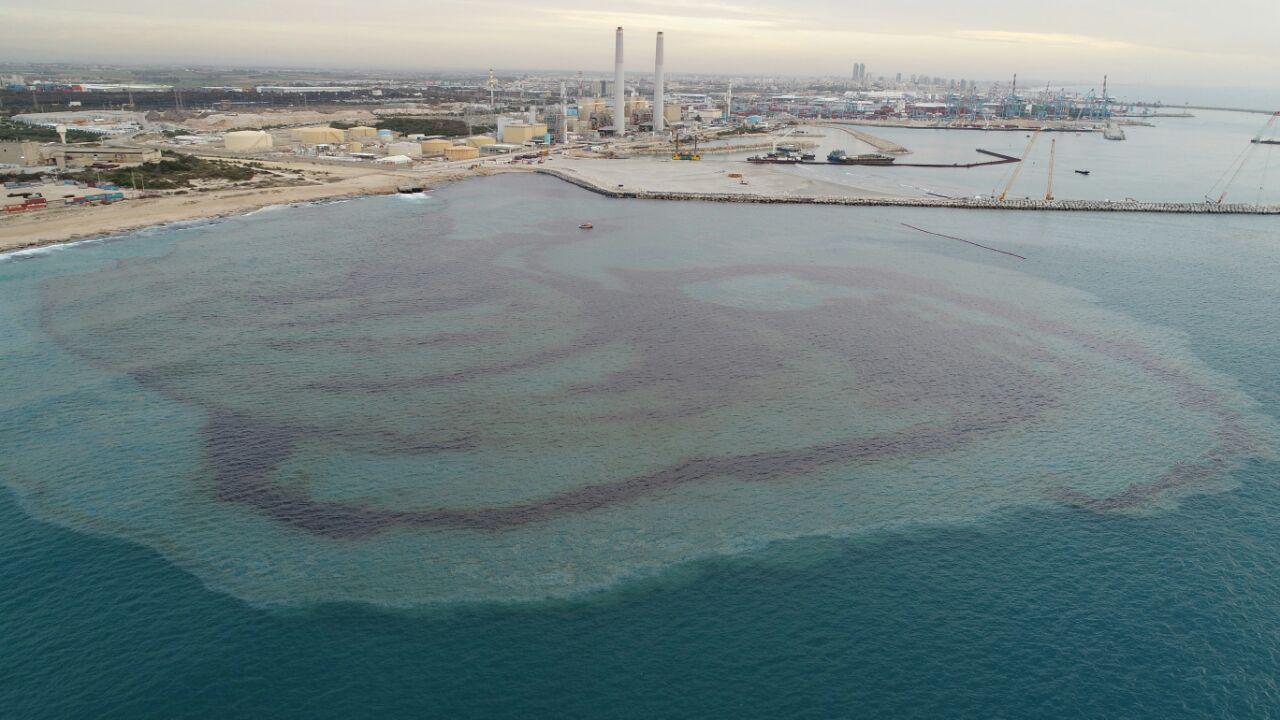 A fuel oil leak in the Mediterranean Sea off the coast of Ashdod that shut down three desalination plants for three days in January, 2017. (Courtesy, Zalul)

Desalination plant membranes are very sensitive and have to be closed in the event of an oil spill.

The incident four years ago was triggered when an Israel Electric Corporation pipe transferring fuel oil from a ship to the shore leaked close to the port of Ashdod in southern Israel.

The plants of Ashdod, Palmachim, and Soreq were closed, and beaches in the area were shuttered for 10 days.

To date, nobody has been held responsible. 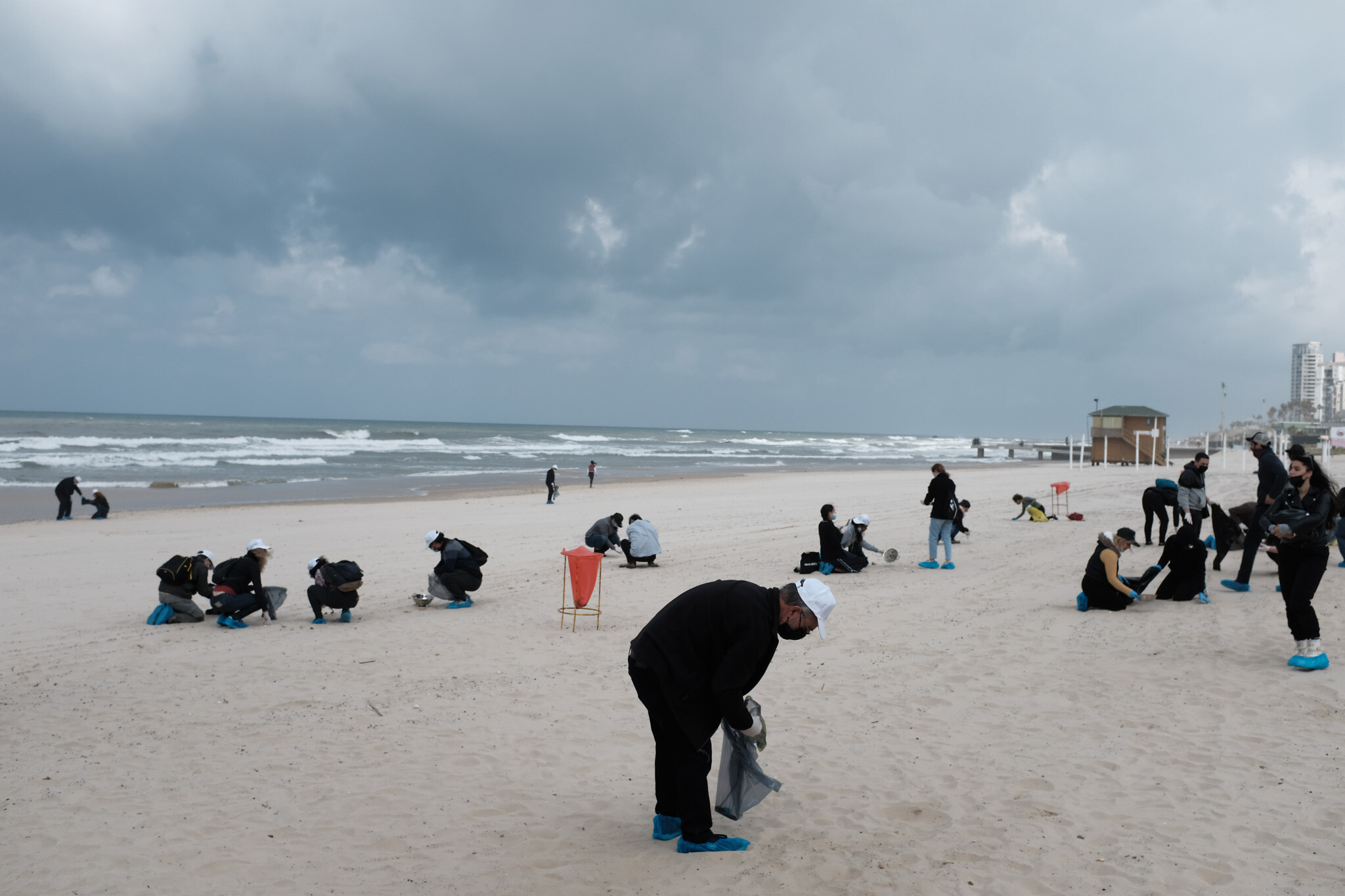 People clean tar off the Bat Yam beach following an offshore oil spill which drenched most of the Israeli coastline, March 2, 2021. (Tomer Neuberg/Flash90)

Most of Israel’s Mediterranean beaches were closed for two and half weeks after an oil spill thought to have occurred at the beginning of February, but only identified on February 18 when huge quantities of tar swept the coastline.

The Environmental Protection Ministry has blamed a Syrian-owned ship, The Emerald, apparently a sanctions-busting vessel that was carrying crude oil from either Iraq or Iran for delivery to Syria.

I’m proud to work at The Times of Israel

I’ll tell you the truth: Life here in Israel isn’t always easy. But it’s full of beauty and meaning.

I’m proud to work at The Times of Israel alongside colleagues who pour their hearts into their work day in, day out, to capture the complexity of this extraordinary place.

I believe our reporting sets an important tone of honesty and decency that’s essential to understand what’s really happening in Israel. It takes a lot of time, commitment and hard work from our team to get this right.

Your support, through membership in The Times of Israel Community, enables us to continue our work. Would you join our Community today?


Join the Times of Israel Community

Capitalism and the Border Crisis

What happened this week in Wyoming’s Legislature? Here’s a recap | Energy Journal

How to choose a healthy cooking oil? And how much should you consume daily?

Why Oil Investors Should Keep An Eye On ESG Scores

Powering the Cleanest Source of Energy