Britain is predicted to have an excess amount of electricity by 2030 due to huge investments in wind and solar power, according to new analysis.

An enormous amount of energy produced by renewable sources could go to waste within a decade without significantly more energy storage technologies, such as batteries and electrolysers to make hydrogen – according to LCP, a consultancy.

Britain’s electricity grid runs on a supply and demand basis and therefore has to be kept in balance to keep the system running and avoid blackouts.

If more energy is produced than there is demand for, it goes to waste.

This impacts wind and solar notably, as unlike coal and nuclear their energy production cannot be increased on command to match demand.

The Government’s new Energy Security Strategy – which is aiming for 95% of its electricity to be from low-carbon sources such as solar panels by 2030 –  raised questions for investors of renewable sources and nuclear plants about if they will be able to find buyers for when they are producing energy above levels of demand. 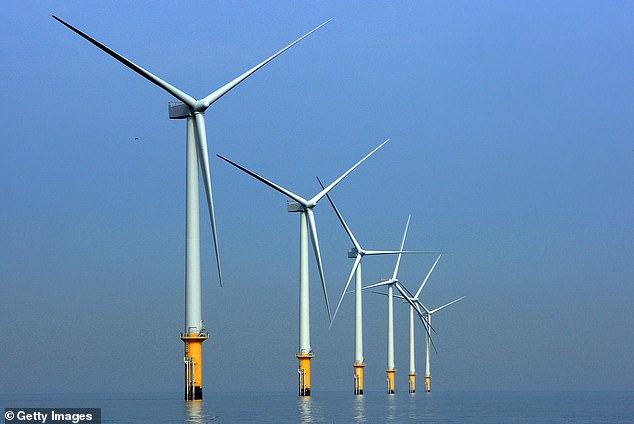 The UK could end up wasting huge amounts of electricity by 2030 as it invests heavily in solar and wind power, but there may not be enough energy storage to stop wastage (pictured: off shore wind farm near the River Mersey) 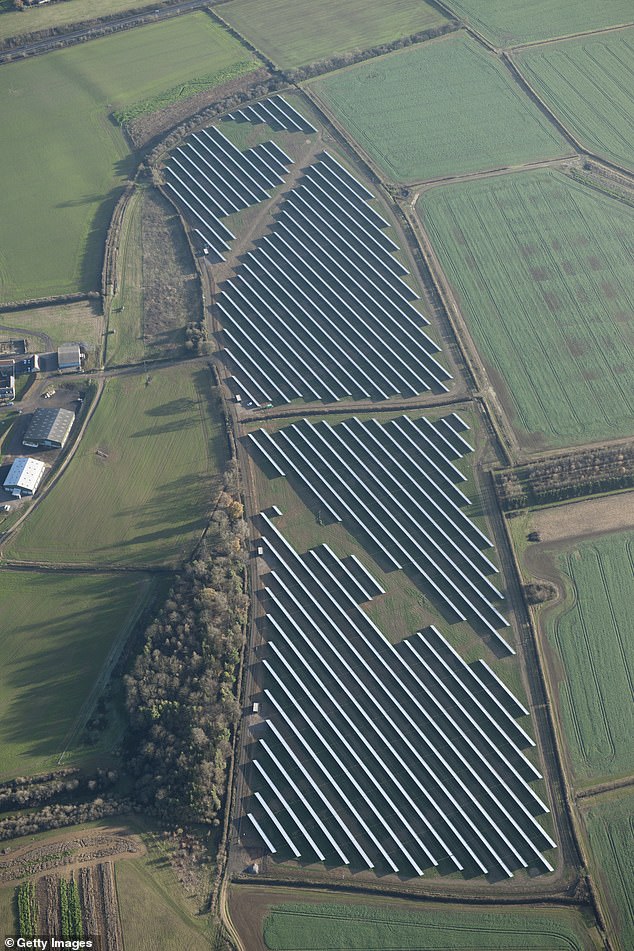 Solar and wind power produce electricity in a less predictable manner than nuclear and coal and therefore sometimes it’s energy goes to waste if there is not enough supply (pictured: solar farm in Northamptonshire)

If they are unable to, it is possible they will ask for higher subsidies for times when they do operate to balance their costs.

Another consequence of this is thought to be that electricity tariffs dubbed ‘time of use’ will offer consumers cheaper power at times of oversupply.

When it’s sunny and windy people will be encouraged to use more energy, by charging electric vehicles or other energy-hungry devices.

Wind is already the second biggest contributor of energy in the UK, and it is believed that the price of wind energy will drop to about a quarter of the price of gas energy in 2023.

However LCP estimates this oversupply could happen for 53% per cent of the time by 2030.

Without a big expansion of energy storage technologies, this could lead to huge amounts of green electricity being wasted, with plant owners being forced to switch off production.

Chris Matson, a partner at LCP, spoke to The Times, he said: ‘For more than half the time in 2030 the UK’s renewable and nuclear backed energy system will be producing more energy from renewables and nuclear than it uses.

‘Simply wasting this generation would harm both consumers and investors so a whole system approach is essential to minimise the cost of delivering net zero.’

He said the UK needed to accelerate the delivery of technologies such as battery storage, pumped hydro-electric plants, and electrolysers.

In 2021, LCP estimated that an extra 20GWh of battery storage could reduce the amount of wind power wasted by up to 50%.

They also predicted by 2025, wind curtailments between Scotland and England will cost consumers £1bn per year and that this figure is likely to grow.

Analysis showed Great Britain curtailed wind power on 75% of days in 2020, with over 3.6TWh of wind power being turned off in total, mainly due to network constraints.

This volume of wasted wind power is enough to have powered over a million homes for a whole year. Gas generated the largest amount of electricity in the UK last month, while coal was only responsible for 1% (pictured: coal fired power plant)

It is predicted that this bill could rise even higher to around £2,700-a-year from October.

The cause of this in part is due to the expected rise in gas prices due to the Russian invasion of Ukraine.

British and European gas prices have both hit record highs since the war in Ukraine began.

While the UK only has about 5% of its gas supplied by Russia, the prices we pay can still be driven up worldwide if Russian supplies to Europe are affected.

According to the National Grid, in April 40% of the electricity generated in the UK came from gas, 23.4% from wind, 17.1% from nuclear and solar generated 6.1%.

Following the conflict and its disruption to the international market, the Government hopes its Energy Security Strategy will help increase our self-reliance for energy production.

The plan includes the ambition to build up to eight nuclear plants to meet around a quarter of projected electricity demand by 2050.

Read More: Boom in wind and solar power will see huge surplus of electricity go to waste in 2030

Record-breaking new solar cell has the highest efficiency yet

Is Battery Storage System necessary for the Solar Panels?

5 Easy Ways to Use Lavender Essential Oil for Hair

Joe Biden is under pressure to ban oil and gas leasing, but…

Where the billions spent on driverless cars by US and China…

War in Ukraine: Russian energy giant Gazprom to cut off…